After the weekend’s elections, which I wrote about here, life in the city continued largely as normal. However, three days of mourning were announced, beginning today, since six of the twleve soldiers killed in the helicopter that was shot down on 29 May in the Donetsk region are from Ivano-Frankivsk region. As this report shows, a shrine to the men has emerged on the memorial to MInistry of Internal Affairs workers who have been killed on duty. The period of mourning means that concerts are by and large cancelled in the city, as are any other celebratory events, night clubs shut down while cafes turn down their music. Their funeral will be held on Sunday and they will be buried at the city’s memorial square, where Roman Huryk – a young student killed on Maidan in Kyiv in February – is also buried. 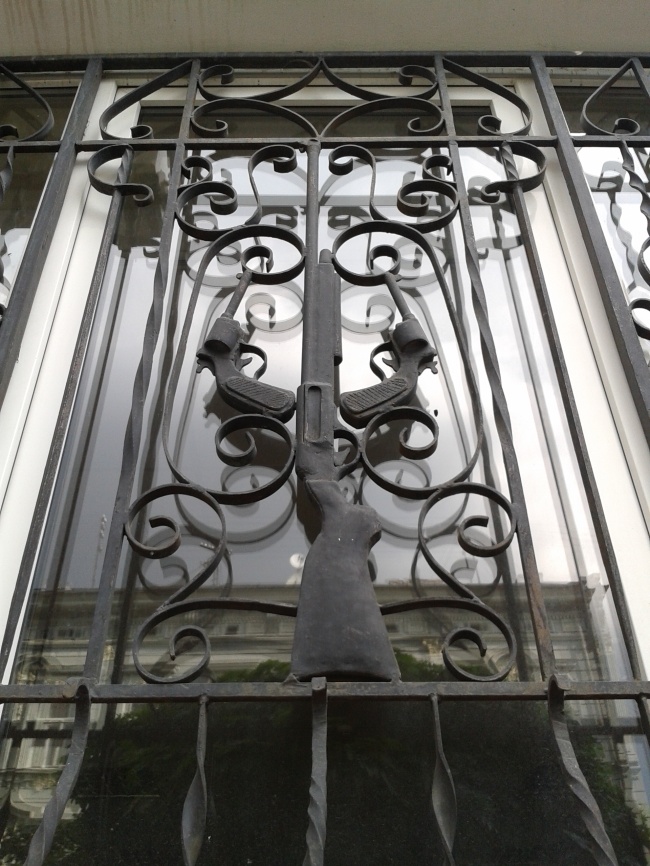 Bars on the tax office window in the city centre on Nezhalezhnosti Street. Despite going to the bookshop next door regularly, I’d never spotted this until my wife pointed it out. Thanks to tweeter @svlmoscow for pointing out these are possibly early c. 20 guns, 1910s-1920s. The shape looks a bit like the Ukrainian trident.

Yesterday, a pre-planned march took place, which happened to coincide with the deaths of the local soldiers in eastern Ukraine. The march was variously called the Fan March or the march for national unity. Although it began as an initiative of local ultras (I’m not sure which team they support, given the distance of several divisions to the professional leagues of any team in Frankivsk), the pictures show that the march attracted a broad cross section of the city’s inhabitants. Following the march, accompanied by patriotic songs, flares were eventually let off the Franko monument by the city’s main theatre with the anti-Putin “la-la-la” anthem fairly popular, judging by these videos. On 28 May, meanwhile, the mothers of Ivano-Frankivsk accompanied by others held a protest outside the Security Service building (I’ve covered plenty of those, but this one was different): they were protesting against Right Sector and Maidan Self-Defence and those groups’ conflict with the police, including their protests outside the police HQ or use of APCs on the city’s streets. While Right Sector and Self-Defence claim to speak for the city community, it seems that these mothers can stake a better claim to represent the population’s views. Although the mothers were calling for peace, it seems that it was already under threat, even though “activists” had also called for a week of peace and quiet in the city. Early on 27 May, Viktor Nemish’s car was subject to a suspected arson attack. Nemish is a local councillor, head of the coordinating council in the city (responsible for negotiating between the city authorities, state institutions and the population – although really that means the Maidan Self-Defence and Right Sector). On 29 May, meanwhile, notorious local UNA-UNSO activist “Chimik”, the Chemist, Mykhailo Boychuk had his car set on fire. Not the APC, which is almost certainly his, but  a small van. For now, there are no suspects, although it seems clear that the two arson attacks were not a coincidence. It seems like the story of the tensions between the people of Ivano-Frankivsk, Right Sector and Self-Defence, and the police, has a long way to run, getting murkier by the day. A new police head has been nominated, someone who is from the Ivano-Frankivsk region, satisfying the parochial demands of Maidan Self-Defence, while he also has a clear anti-Party-of-Regions past. However, it’s not clear if he has been able to take up his post, with the coordinating council – headed by arson-attack-victim Nemish – yet to approve his candidature. Meanwhile, Right Sector members entered the city’s tax office on Wednesday to protest against the new head who had been nominated. They claim to be countering corruption and nepotism with their campaign, although the news report linked to here suggests that there is a connection between Right Sector’s opposition to the new head and the rather fishy matter of an ongoing investigation into the local vodka plant. The photo accompanying this blog, meanwhile, is of the bars on a window facing onto the city’s main street from the tax office. Despite often visiting the bookshop next door, I had not spotted these intriguing bars where guns are moulded into shapes protecting the windows. A reflection, perhaps, of past methods used in tax investigations? Or a sign of things to come? Meanwhile, all of the votes from the region have been counted in the presidential election (and from the city’s by-election). It is confirmed that here Poroshenko got 65%, exceeding the national average by 10 points, while Tymoshenko was slightly more popular than nationally with almost 15%. Svoboda’s Oleh Tyahnybok got 1.8%, about 0.7 points more than nationally, while Dmitro Yarosh, leader of Right Sector, got 0.6% of the vote in the region, so below the national average. If western Ukraine, and Ivano-Frankivsk specifically, is the heartland of Ukrainian nationalism, it’s not evident in the election polling. In the parliamentary by-election, the Svodboda candidate got just 14.9% of the vote, despite the now-deputy-PM Svoboda candidate winning with over 30% in the 2012 elections. The winner was notorious local businessman and Ihor Kolomoyskyy associate Oleksandr Shevchenko with over 37%. Second was incumbent mayor Viktor Anushkevychus with just over 25% – who is now condemned to sort out the messes he’s made in the city over seven years as mayor. And so, Ivano-Frankivsk is again a city in mourning, with the events in eastern Ukraine now seeming closer and more real in the city. At the same time, everyday life goes on, too, as the city and its residents seek to maintain some semblance of normality in post-Maidan, post-Revolution and now post-election Ukraine.